On the analysis of RAW converters

Even if we know the correct initial image (represented by a synthetic target with known characteristics), the contribution of each component from this list remains unclear.

Meanwhile, it is quite possible to exclude the photo camera (and the photographed scene) from the process and to study only the RAW converter itself, supplying it with specially generated input data. These data need not be plausible (that is, obtainable from an actual camera); actually, many interesting features of algorithms used in converters are better observed using unreal data. 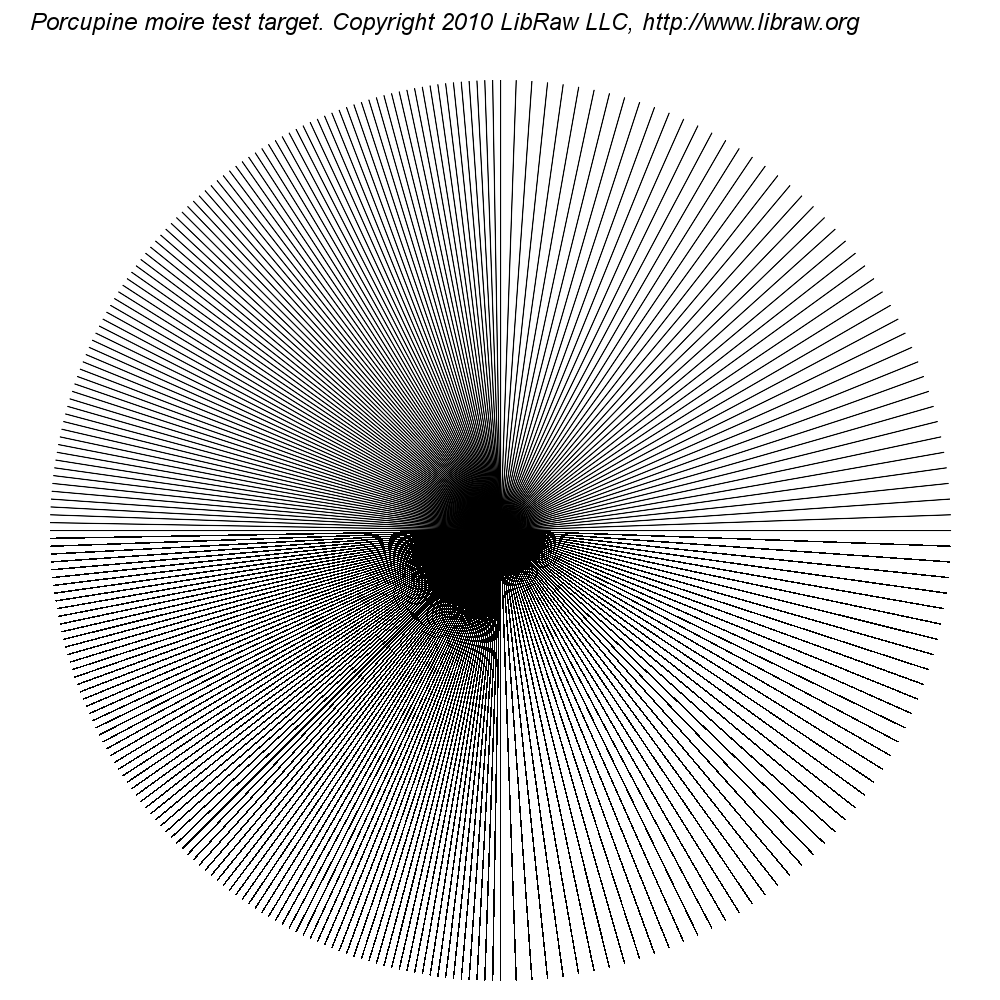 In the process of studying possibilities and approaches, we generated the first target, which sets truly intolerable conditions for demosaicing algorithms (Bayer interpolation).

The target consists of one-pixel-wide lines emerging from a common center and forming a circle:

The target was used to form a DNG file as follows:

This DNG file was successively processed using all 12 interpolation methods available in LibRaw 0.12. The results are listed in the table below (all images are clickable and can be opened in full size 1000x1000). The pictures in the table are made so small on purpose, so that the readers would view full-size images rather than previews, since the preview formation algorithm is prone to moire itself. The results are converted to 8-bit PNG to save traffic while preserving image look.

As is seen, all these demosaicing methods generate abundant color aliasing (no wonder for such a target), including half (binning of 4 pixels into 1). None of the methods has led to a satisfactory picture. However, three out of 11 methods produced a significantly better result than others: AMaZE, LMMSE and AHD (listed in the order of quality deterioration) yielded the least marked moire.

The interference pictures produced by demosaicing algorithms on the aforementioned target are so indicative that one feels overwhelming desire to identify the algorithms used in commercial software. For these purposes, I tried

The settings were the default ones with a single exception: for Camera One, sharpening was set to Off, because it works too intensely on such a high-contrast target.

For two of the above programs, the method worked successfully: 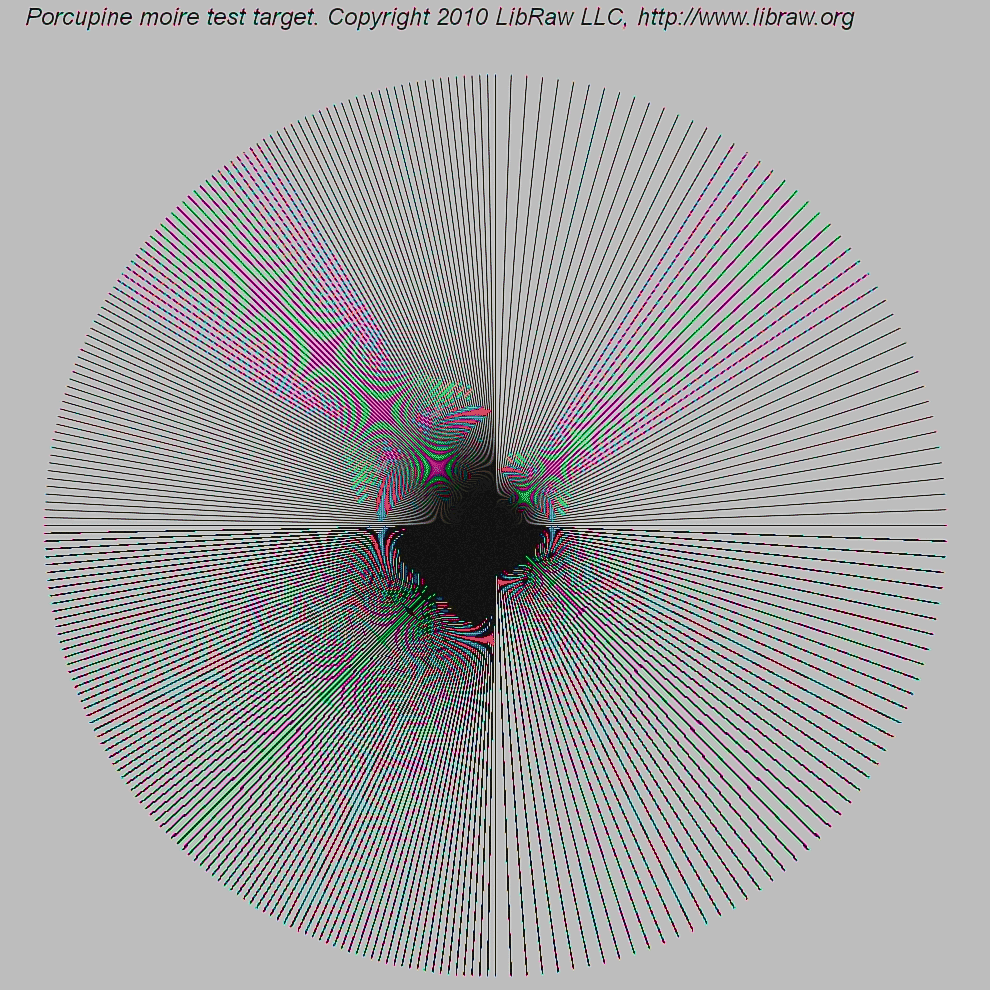 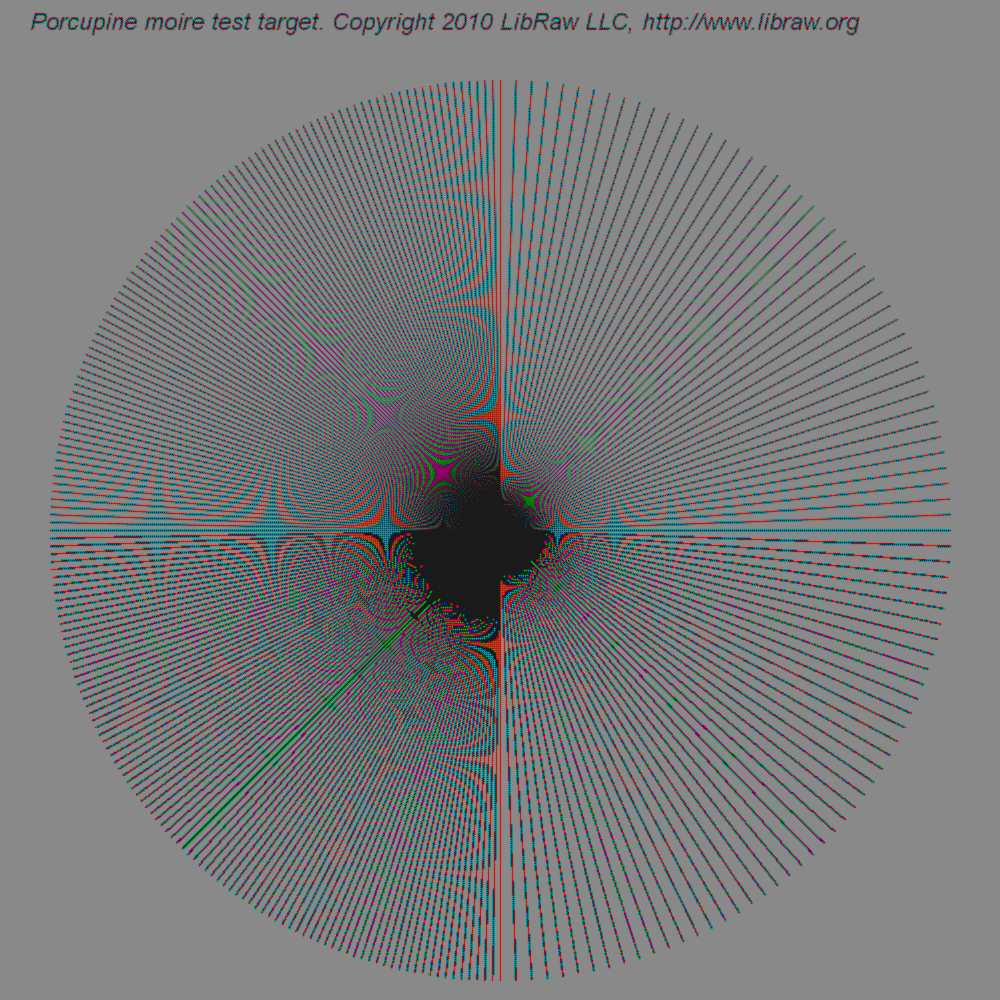 The results yielded by HDR PhotoStudio are extremely similar (up to minute features) to bilinear interpolation in LibRaw/dcraw (i.e. quality=0 setting). 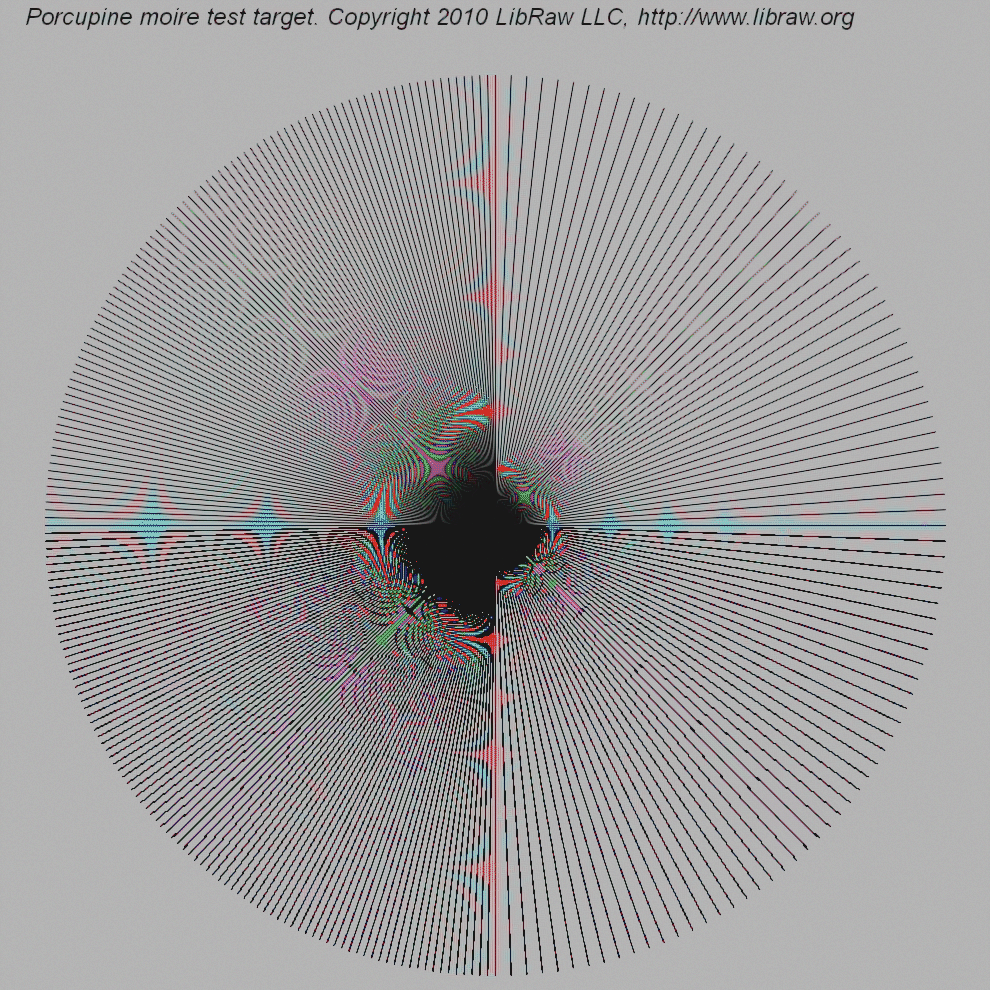 I failed to identify the algorithm in Capture One: the magenta-colored spot at 10:30 (northwest) wasn't seen in any of the LibRaw algorithms.

If we generate DNG from a blurred target (we used Gaussian Blur, radius 1.0), the problem becomes much closer to photographic reality.

This target ALSO has color aliasing for all 12 interpolation methods available in LibRaw. To avoid overloading this text, I show 5 of them (the three best methods from the previous test, DCB, and half , which is for some reason considered to be most immune to interpolation artifacts).

Interesting: the smallest amount of moire for this more photographically real model resulted from algorithm LMMSE. I advise the authors of RAW converters to take a closer look at it.

The very first experiments on feeding RAW converters with an artificially generated target brought me genuine pleasure. There will be more experiments. Beware, oh authors of converters!

And a separate word for pixel peepers. If, all of a sudden, your camera/lens can create a pixel-sized contrast object on the matrix, you can never predict what color it will be - or know if it will bear any resemblance, however remote, to the initial color.

For the independent exercise